On Monday, January 28, a meeting was held in the government of the Kaliningrad region with the participation of a delegation from the Hannover region led by the president of the region Hauke Jagau. The regional government at the talks was represented by Deputy Prime Minister Harry Goldman, Minister-Head of the Agency for International and Interregional Relations Alla Ivanova, Minister for Culture and Tourism of the region Andrei Yermak.

Andrei Tolmachev, Director General of the Development Corporation, who took part in the meeting, elaborated on the traditions and prospects of economic cooperation between the Kaliningrad Region and the state of Hanover. Currently, the region has accumulated a huge potential for the implementation of business initiatives involving investments from Germany. These are projects in the field of engineering, food production, agriculture, tourism: HIPP, BMW, Ushakovo Yards, Grammer, Stieblich Hallebau. Following the results of 2017-2018, the federal lands of Germany are among the top five importers of the region. The visits of the Kaliningrad region Government delegations to Berlin in 2017 and 2018, meetings with the business community at the site of the Federal Union of Small and Medium Businesses in Germany, which were attended by over 200 entrepreneurs, indicate the increased interest of investors in this country to implement new projects in the most western region of Russia. In recent years, they have been translated into certain investment projects in the field of agriculture and engineering.

At the meeting with the President of the Hannover region, there was also a discussion of new investment initiatives that can be implemented taking into account the tax and administrative preferences of SEZ and the special administrative region operating in the Kaliningrad Region.

In turn, the president of the Hannover region, Hauke ​​Yagau, noted that he had visited the Kaliningrad region for the first time and was impressed. He also shared information about Hanover.

It should be noted that the visit of Mr. Hauke Jagau to the Kaliningrad region was timed to the holding of the “Night” project - a production dedicated to the memory of the Holocaust victims and realized with the financial participation of the Hannover region.

Photo is provided by the Kaliningrad region Government press office. 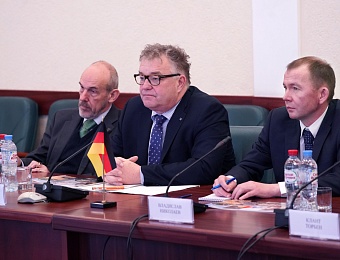 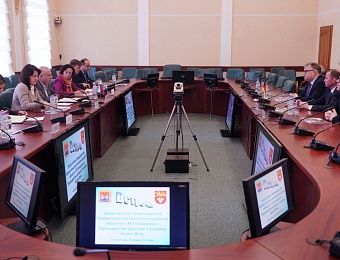