The Fourth Eastern Economic Forum began its work in Vladivostok. From September 11 to September 13, the FEFU educational building on Russky Island became the key autumn business platform for the countries of the Asia-Pacific region. The cross-cutting theme of the Eastern Forum - 2018 was defined as "The Far East: Extending the Limits of Opportunities".

The main participants of the forum are Russian President Vladimir Putin, Japanese Prime Minister Shinzo Abe and Prime Minister of the Republic of Korea Lee Nak-Young. More than 6 thousand representatives from 60 countries of the world take part in the forum. The Kaliningrad Region Development Corporation is represented at the forum by the General Director Vladimir Zarudny. He attended a plenary session at which President Vladimir Putin spoke, as well as a series of round tables and discussions on the investment attractiveness of Russian regions.

According to him, the current forum is one of the most important events aimed at developing economic cooperation with Asian countries. "The agenda of the forum is very voluminous, multifaceted. This is the solution of the issues with our South Korean partners, and the establishment of friendly and, above all, economic ties with Chinese partners, with some new provinces, a presentation of the investment potential of the Kaliningrad region. Participation in the forum will allow us to talk more about the jurisdiction of a special administrative district, the peculiarities of the tax and fiscal burden of the Kaliningrad Special Economic Zone, our customs procedures, and existing industrial parks. Speech at the forum is an opportunity to talk about the route map, how to become a resident, how to find partners and customers in the markets nearest to the region. The program is open, there are a lot of questions that will be discussed at panel discussions, round tables", Vladimir Zarudny noted.

The Eastern Economic Forum was established by the Decree of the President of Russia Vladimir Putin to promote the accelerated development of the economy of the Far East and the expansion of international cooperation in the Asia-Pacific Region. 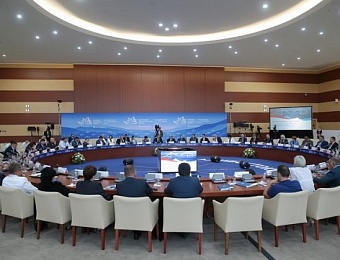